When in doubt or flummoxed by choice, I turn to my go-to flower-arrangement solution: monochrome. Disparate flora can produce a decisive, chic bouquet if united in shades of a single color.

That approach was the natural choice when it came to this month’s inspiration artwork, a one-color piece by Italian-American artist Salvatore Scarpitta (1919-2007) that’s currently part of a show at New York’s Luxembourg & Dayan Gallery. When his art studies in Italy were interrupted by WWII, Scarpitta served as a U.S. Navy sailor—one of the “monuments men” who rescued art stolen by the Nazis. His battle experience informed his art, including pieces known as “bandage paintings,” wide strips of cloth wrapped around stretcher bars to create shadows and texture. These works speak of both wounds and healing, themes that seemed right for a floral arrangement marking the end of a conflict-filled year. The color of 1960’s “Mailbox” also seemed appropriate for a “festive” bouquet, though red is not normally my first choice for garden or cut flowers.

I started with a red-glazed ceramic vase from New York artist Donna Green, then filled it with glossy red Ilex-berry branches, tiny matte red rose hips and deep red spray roses in various stages of openness. By using the last two elements sparingly in an asymmetrical cluster, I was able to form peaks and shadowy valleys like those the eye travels across in Scarpitta’s piece. The confident monochromatic approach might be a simple mood shifter, welcome at this time of year. 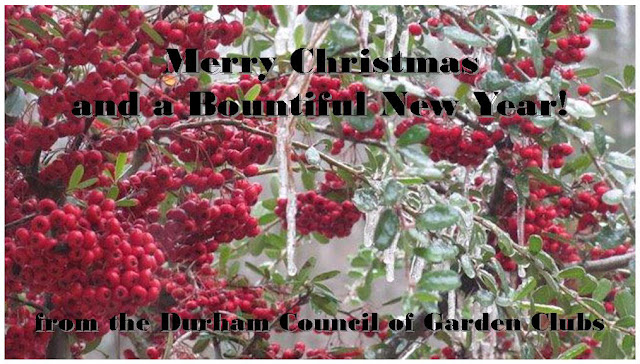 Posted by DurhamCouncilGC at 7:57 AM No comments: 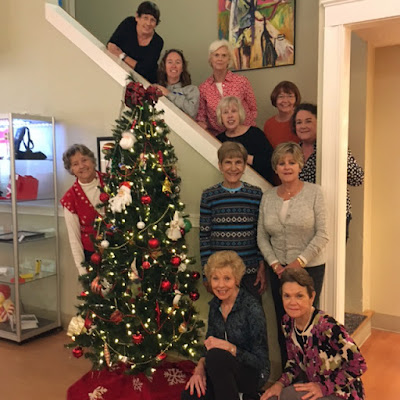 The Town & Country Garden Club of Durham gifted Ronald McDonald House  much holiday cheer for the club's final 2016 charity project. First, "elves" of the garden club decorated three trees at the RMH on November 30, 2016. Next the elves prepared and served a festive dinner on Tuesday, Dec. 13 for 75 guests.
Photos by the T&CGC. 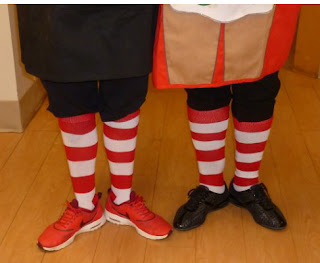 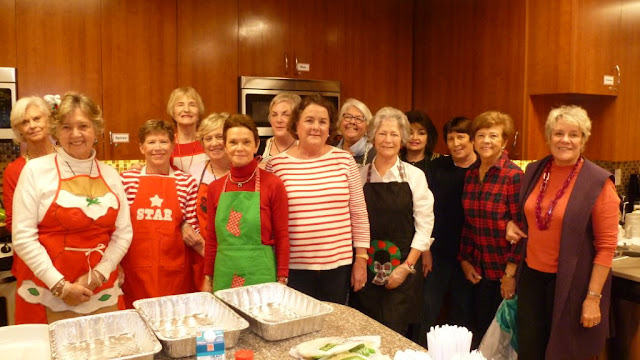 Posted by DurhamCouncilGC at 9:27 AM No comments:

Confessions of a Nibbler: The Story of the Inside-Out Flower

The professor and I finished dinner and I asked, “Do you want some dessert?”  “Sure!” he says, and we head out the door; not to a restaurant or ice cream parlor, but to our side yard where the dessert tree, Ficus carica ‘Brown Turkey’, stands; its branches are laden with sweet flower clusters. Ah figs, my favorite edible flowers. Yes, flowers. What we call the “fruit” of the fig is actually a swollen stem called a synconium that contains a cluster of inflorescent flowers. Break one open and you can quickly see the strange looking tiny flowers. Even though they look rather odd, they have all the same parts as flowers that bloom on the outside of the stem.

You may have heard of the special relationship that the fig has to its pollinator, the fig wasp Blastophaga psenes. When the synconium is full of flowers that are ready to be pollinated, the tree sends out “come hither” chemicals to attract a pregnant female wasp. A tiny hole opens up to allow the wasp in. The opening is so small that she usually loses her wings and antennae during the entry. Once inside, she pollinates the stigmas and lays her eggs in the ovules of some of the florets. Having done her duty, she dies. Don’t worry. You won’t eat her. She is fully absorbed before the “fruit” is ripe.

When the eggs hatch, the larva feed on the endosperm tissue of the galled ovary. At maturity, the males and females mate and the males chew a hole through the wall allowing the pollen-carrying pregnant females to escape and the cycle begins again. Now that the flowers are pollinated, the fig ripens and the tree changes its chemical call to attract fruit eating birds and animals (like me!)

The relationship between the fig and its pollinator is one of the best examples of coevolution, but it all sounds so chancy. What if we don’t have any fig wasps in our neighborhood? Lucky for us, the cultivars that grow best in our area do not require the wasp in order to fully produce. Figs are divided into four varieties; the caprifig, the Smyrna fig, the San Pedro fig and the common fig. The caprifig has male and female flowers and requires the wasp for pollination. The Smyrna fig needs to be cross-pollinated with the caprifig. The San Pedro fig is an intermediate, meaning that its first crop in the spring doesn’t need pollination, but it’s second crop in the fall does. The common fig has all female flowers and doesn’t need to be pollinated in order to fully develop, although it will not produce seed. Common fig cultivars include ‘Black Mission’, ‘Brown Turkey’, ‘Brunswick’, and ‘Celeste’.

Figs produce two crops each year; one in the spring called the breba crop that develops on last season’s growth and the main one in the fall that develops on the current year’s growth. The branches holding the spring crop may die back in our winters, but don’t despair. The fall crop soon ripens producing delicious gooey packets of sugary inflorescences to delight nibblers of all species. http://www.figweb.org/Interaction/How_do_fig_wasps_pollinate/
Posted by DurhamCouncilGC at 9:05 PM No comments:

﻿
The Forest Hills Garden Club of Durham held its highly spirited annual Christmas Auction Dec. 7 and raised monies for a number of philanthropy projects slated for 2017. In recent years the club has donated mulch and manpower for its annual Briggs Ave. Community Garden project in the spring; is a leader in poinsettia purchase for the Poinsettia Project for Veterans at the Durham VA Medical Center; and presents various gifts to Durham schools and organizations throughout the year. The FHGC auction was hosted by Treasurer Moe Berry and Past President Mindy Solie served as auctioneer.  Photos by Mary Clayton, FHGC member.
﻿

Posted by DurhamCouncilGC at 8:29 AM No comments:

Listen to this podcast from the Triangle Gardener while you're trimming your Christmas tree, baking cookies or any holiday tasks and appreciate how NC growers work year-round to bring your tree to market!

Listen:  NC Christmas Trees – Farm to Floor
Posted by DurhamCouncilGC at 8:27 AM No comments:


﻿﻿﻿
The Durham Veterans Affairs Medical Center is once again flush with over 100 poinsettias thanks to the Heritage Garden Club and its fellow members of the Durham Garden Clubs with its annual Poinsettia Project for Veterans.


Heritage Garden Club project organizers ordered two large poinsettias and 111 standard size plants, however, they were surprised by an additional six poinsettias donated by the Campbell Road Nursery, Inc. of Raleigh (campbellrdnursery.com/) for a total of 119 plants. Seventeen of the poinsettias are located in the VA's CLC dining room and the rest are displayed in the chapel and vestibule.

"Campbell Road Nursery really have some of the best, and healthiest plants I have seen. They are big, full and vibrant," said Project Chair Marcia Loudon.

Photos by Council President Trish Stewart.
Posted by DurhamCouncilGC at 8:37 PM No comments:

Posted by DurhamCouncilGC at 11:50 AM No comments:

"Foraging Wild, Edible Plants (Many of Which are in Your Own Back Yard)"
Frank Hyman, Cottage Garden Landscaping
Thursday, Dec. 8, 7:30 - 9 p.m.

A Holiday Tree Ornament Workshop: Celebrating our Golden Anniversary and 35 Years of Wildflower of the Year
Sunday, Dec. 4, 2- 4 p.m.