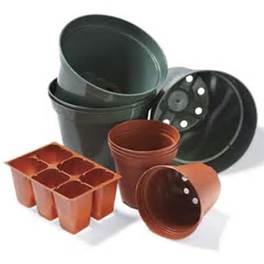 From the Sarah P. Duke Gardens...

The Spring Plant Sale is this Saturday, April 2, from 8 a.m. to noon!

This year, we will be collecting and recycling old plastic pots. Take a look at any pots you may be wanting to get rid of and, if they have a triangle on the bottom with the numbers 1 through 7, we can take them!

For more information about the plant sale, visit the Duke Gardens website: http://gardens.duke.edu/events/plant-sales
Posted by DurhamCouncilGC at 12:14 PM No comments:

WSJ, March 3, 2016
THE CHALLENGE of florally interpreting an artwork every month for this column has pushed me to tackle paintings with moods and palettes you don’t see in those from the obvious Dutch masters and impressionists. I rather love that.
Still, as I walked the aisles of a Manhattan wholesale flower shop early one recent morning, completely flummoxed, I questioned the wisdom of choosing Frank Stella’s abstract canvas “Flin Flon VI” (1970) as my latest jumping-off point. I’d thought the timing was apt: A Stella retrospective just ended at New York’s Whitney Museum and the painting’s colors prettily anticipated spring.

As I sipped coffee to jolt me out of a creative impasse, I realized the answer was staring right at me: that most classic of spring flowers, the vivid, graphic, kinetic tulip.

The saturated colors of these single, double and parrot varieties echo Mr. Stella’s palette, and the closed buds and foliage form points and arcs delightfully similar to those in the painting. It felt freeing and decisive to gather just one type of flower.

For my vessel, I chose a new design by event designer David Stark and ceramist Victoria Asheley Shaheen—a pierced ceramic lid set atop a simple glass vase. It allowed the sweep of the fresh green stems to show nearly uninterrupted, all the better to evoke my inspiration.
http://www.wsj.com/articles/a-flower-arrangement-inspired-by-frank-stella-1457026673
Posted by DurhamCouncilGC at 2:13 PM No comments:

Posted by DurhamCouncilGC at 1:56 PM No comments:


Looking for a comprehensive vegetable gardening guide for the Piedmont and eastern North Carolina?
See this helpful brochure from the Cooperative Extension:  http://www.growforit.org/images/uploads/publications/Veggie-guide-east.pdf
Posted by DurhamCouncilGC at 10:58 AM No comments: 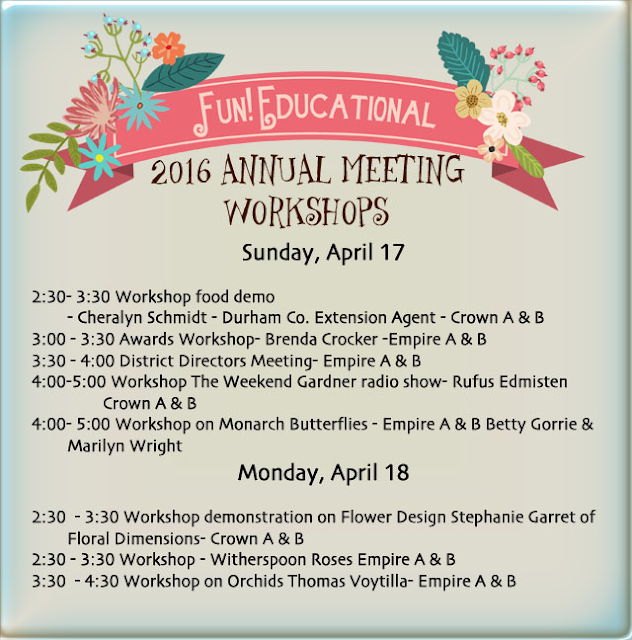 Calling all Council Members: Register soon for the GCNC Annual Meeting in Durham!
Many free workshops available on Sunday and Monday.
http://www.gardenclubofnc.org/…/…/03/GCNC-REGISTRATION-5.pdf
Posted by DurhamCouncilGC at 9:19 AM No comments:

2016 North Carolina Wildflower of the Year

The 2016 North Carolina Wildflower of the Year is not your run-of-the-mill garden flower. Northern rattlesnake-master (Eryngium yuccifolium), also known as button snake-root or button eryngo, is an unusual prairie species native to the eastern and central United States. With a basal clump of leathery strap-like, blueish green leaves and a single upright flowering stalk, this distinctive species more closely resembles a yucca plant than its closest relatives in the carrot family (Apiaceae). Northern rattlesnake-master is a great garden plant for the interesting form and texture provided by its leaves, flower clusters, and seed heads.
In mid- to late-summer, a single stiff stem topped with round, spikey flower clusters rises up two to four feet from the clump of yucca-like leaves. Each one of these round clusters is composed of many small, tightly arranged flowers with white to pale green or blueish petals and pointy bracts, giving the appearance of small, bristly golf balls. The flowers have a slight honey-like scent and attract a steady abundance of incredibly diverse pollinators including native bees, wasps, flies, butterflies, moths, and beetles. Upon ripening in the fall, the seed heads look nearly identical to the flower clusters except they are brown in color. Both the flowers and persistent seed heads can be interesting additions to cut flower arrangements, and the tough leaves and flowers are fairly deer and rabbit resistant.
Northern rattlesnake-master has a long and interesting history of human use. Perhaps the earliest known use of this species dates back 8,000 years, when prehistoric North Americans used the fiber from its thick leaves to make shoes and sandals. The common name of this species comes from early 18th century accounts of Native Americans applying a root preparation to their hands and arms to protect them while handling rattlesnakes and also brewing a root tea to use as rattlesnake antivenin.

Northern rattlesnake-master occurs throughout the state of North Carolina along sandy roadsides, prairies, and open woods, and prefers open, sunny sites with dry to average, well-drained soil. It will become spindly in the shade and will decline rapidly if planted in poorly drained soils. Given the right conditions, this species will produce a sturdy taproot and become a tough, long-lived drought-resistant perennial. Use northern rattlesnake-master as an accent plant or dramatic focal point in a sunny perennial bed with butterfly milkweed (Asclepias tuberosa), black-eyed susan (Rudbeckia hirta), and asters (Symphyotrichum spp.).
General information about the N.C. Wildflower of the Year program and how to order seeds.
The illustration of Northern Rattlesnake-master above was created by Dot Wilbur-Brooks. The NC Botanical Garderns has printed this design on T-shirts, available for purchase in our Garden Shop.
http://ncbg.unc.edu/north-carolina-wildflower-of-the-year/
Posted by DurhamCouncilGC at 10:08 AM No comments:

Garden Spotlight: The Gardens of the Crescent City

Posted by DurhamCouncilGC at 11:32 AM No comments:

At it’s February 9 meeting, the Town & Country Garden Club unanimously approved the recommendation by it’s Beautification/Projects committee to allocate $18,000  to the Hub Farm for the Front Entry Gardens.

The Durham Public School’s Hub Farm is a 30 acre woodland, aquatic and farm habitat whose mission is to engage Durham county school students in all aspects of food production, as well as land stewardship, to foster healthy living, career exploration, environmental stewardship and community engagement.

Several of our members have visited the Hub Farm already and we are excited to be holding our September meeting there as well.  Check out Hub Farm/Durham to learn more. http://www.thehubfarm.org/ We are indeed grateful to all the wonderful supporters of our November Awesome Auction who facilitated this record-setting year for our club.
Posted by DurhamCouncilGC at 8:34 AM No comments:

How Your Supplements Interact With Prescription Drugs 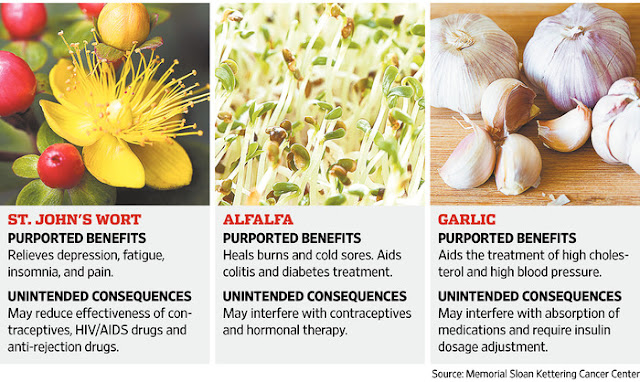 As millions of Americans consume over-the-counter herbal and botanical supplements in a bid to boost health, there is increasing evidence that these products can interfere with a wide range of prescription medications used to treat everything from cancer to depression to high blood pressure.

Recent studies have found that a greater number of supplements than previously thought may affect the way certain enzymes in the body metabolize drugs. Some supplements may inhibit the enzymes’ ability to break down a drug and clear it from the body, causing medication to build up to potentially toxic levels and even cause overdose. Other supplements may increase the rate at which a drug is broken down, clearing it from the body too quickly to be effective.

Botanicals, for example, can interfere with drug-metabolizing enzymes in the liver, stomach and intestines and proteins in the blood that can alter the way drugs are distributed throughout the body.

Researchers at the University of Minnesota in Minneapolis are exploring interactions between cancer drugs and dietary supplements, based on data extracted from 23 million scientific publications, according to lead author Rui Zhang, a clinical assistant professor in health informatics. In a study published last year by a conference of the American Medical Informatics Association, he says, they identified some that were previously unknown.

For example, the herb Echinacea, often taken in the belief it boosts immunity and wards off colds, is already known to affect the way certain chemotherapy drugs work. But the researchers also identified a possible interaction with a breast cancer drug that could reduce its effectiveness.

Philip Gregory, an associate professor of pharmacy and director of the Center for Drug Information and Evidence-Based Practice at Creighton University in Omaha, Neb., says many patients who are admitted to intensive care units have supplements circulating in their system that can interact with drugs and cause bleeding, liver, heart and nervous system complications, so it is important to ask about supplements in medical history-taking.

This annual celebration of Durham’s trees is free and open to the public. Activities are suitable for all ages and tools are provided for the volunteer tree planting.

The schedule of activities includes:

Entry to the Museum of Life and Science is free to all Durham County residents on Sunday, March 6. Showing proof of residence for each adult is required to receive free admission, and the limit is five children per adult resident. For additional information, or to volunteer for this community tree planting event, sign up below or email info@keepdurhambeautiful.org or call (919) 354-2729 or (919) 354-2729.
Posted by DurhamCouncilGC at 4:05 PM No comments: