Editor's note: Aphids attack most gardens and come in armies in different colors and varieties. Here is some basic information from the Clemson Cooperative Extension with links to specific aphid info by plant type. These links should help any urban gardener to first identify, then combat these pests!

General Information:
Aphids are small, soft-bodied, pear-shaped insects that measure 1/16 to 3/8 inch. There are several species of aphids. Depending on species, they can range in color from tan, pink, or green to almost black and may or may not have wings. Aphids feed on leaves and stems by piercing the plant tissue and sucking plant sap. Their feeding can cause leaves to curl or become distorted. In addition, aphids sometimes serve as vectors to transmit plant viruses which may result in disease development. The first sign of aphids being present is usually a sticky residue left on leaves. The aphids excrete a sticky substance called honeydew as they feed. The honeydew will land on any surface beneath the feeding area, such as leaves, branches, understory plants or even cars and concrete surfaces. Sooty mold is a fungus that grows on the sticky surface of the honeydew. As the sooty mold grows it will form a black, powdery or velvety coating on leaves and other areas where the honeydew landed. The good news is that sooty mold does not infect the plant tissue.

Prevention & Treatment:
Aphids have several natural enemies, such as lady beetles, lacewings, syrphid flies, damsel bugs and wasps. Since the use of insecticides will also kill beneficial insects, it is best to try to first allow the beneficial insects to reduce the aphid population. For more information on these insects, see EIIS/BB-1, Beneficial Insects and Related Arthropods (http://entweb.clemson.edu/eiis/pdfs/bb1.pdf).

Posted by DurhamCouncilGC at 2:54 PM No comments:

Posted by DurhamCouncilGC at 9:10 AM No comments:

The Annual Presidents Meeting of District 9 will be held Thursday, June 2, 2016 from 9 a.m.-noon.
All Garden Club Presidents should plan to attend. 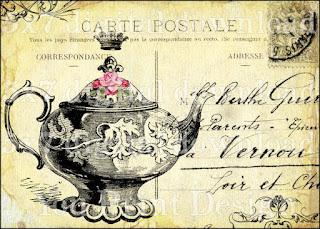 Please respond to District Director Andrea Lewis with your RSVP:  andrealewisandrea771@hotmail.com,  or by phone: 919.732.6762.
Posted by DurhamCouncilGC at 8:49 AM No comments:


Head to Witherspoon Rose Culture this Saturday, May 21, 2016 for First Bloom!

Day-long schedule of speakers, food trucks and Witherspoon tours. Percentage of proceeds go to the Ronald McDonald House of Durham.

Posted by DurhamCouncilGC at 10:07 AM No comments: 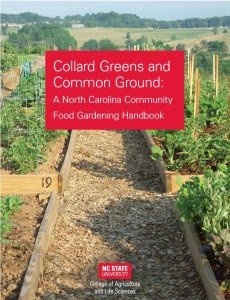 Thinking of creating a community garden in your neighborhood? Not sure how to get started, much less design, build or even govern it?

The handbook is numbered: AG-806 | December 2015, and can be purchased for $10 through your local Extension office or through the PDF link found on the NC Cooperative Extension website:

Posted by DurhamCouncilGC at 9:20 AM No comments:

Plant a Row for the Hungry: Logan's Targets 40,000 lbs of Veggies

Are your eyes bigger than your stomach when it comes to planting a vegetable garden? Do your friends and family beg you to grow less squash? Convert some of that garden space to feed the hungry with Logan’s and Inter-Faith Food Shuttle through Plant a Row for the Hungry.
What is Plant A Row for the Hungry?
Plant A Row for the Hungry (PAR) is a national program sponsored by the Garden Writers Association that encourages garden communities and individuals to donate fresh vegetables, fruit, and herbs to people in need in our community. Inter-Faith Food Shuttle distributes your produce directly to local families in need. 2016 marks the eighth year that Logan’s has participated in this program by providing starter kits to get gardeners growing as well as providing a drop off location for fresh produce donations in Raleigh. Last year, 30,000 pounds of fresh produce were donated at Logan’s! Just harvest and bring your produce to Logan’s during our normal business hours and we’ll do the rest.
Donation Totals for Previous Years
2009 – 555 pounds
2010 – 6,454 pounds
2011 – 16,664 pounds
2012 – 20,106 pounds
2013 – 26,460 pounds
2014 – 35,186 pounds
2015 – 30,000 pounds
2016 – GOAL is 40,000 pounds!
Why Donate?
Did you know that low-income families have the highest rates of obesity/chronic disease and hunger in our community – largely due to limited access to healthy, fresh foods? Produce from your farm or garden helps provide access to fresh, nutritious food. Gardening provides physical activity, stress relief, family bonding, community building, learning opportunities, fresh food for healthy eating, time outdoors, and FUN! Start your own garden in your backyard or join with others to create a community garden. Garden gloves ready? Sign up o PAR-ticipate at Logan’s customer service desk.

Safety Guidelines:
We cannot accept produce grown with animal manure not composted to USDA Organic standards or sprayed with pesticides within two weeks of harvest.
If you have questions about Plant A Row for the Hungry, please contact: info@logantrd.com. 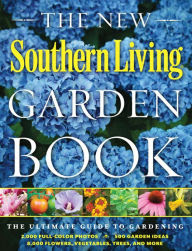 An all-new revised and updated edition, The New Southern Living Garden Book is THE definitive source on gardening from the brand Southern gardeners have turned to for nearly 50 years. Completely redesigned and updated for the first time in 10 years, the new edition features over 1,700 beautiful color photographs and over 7,000 featured plants. Enhanced features include a monthly garden checklist, a Q&A section to tackle everyday problems, and garden design solutions, plus industry experts provide the hottest trends and tips combined with old-fashioned wisdom. From the new homeowner just starting out in gardening to the Master Class gardener, this book will be an essential resource.

For nearly 50 years, Southern Living magazine has delivered definitive Southern food, decorating, and gardening ideas to over 15 million readers monthly, making it one of the most trusted lifestyle brands in the country. A team of dedicated Southern gardeners and writers lent their expertise to this book, led by Southern Living Senior Garden Writer, Steve Bender. Steve grew up in Lutherville, Maryland, and, in his words "was exiled to Alabama" in 1983, for reasons that remain secret to this day. He loves fried okra and often selects dinner wine based on whether it goes well with fried okra. Known as the Grumpy Gardener, his column is one of the most popular in the magazine and his mission is to make gardening uplifting, accessible, and inspirational to all.
Posted by DurhamCouncilGC at 7:43 PM No comments:

The 2016 Annual Meeting of the Durham Council of Garden Clubs wrapped up its business year with a celebratory awards program and luncheon May 3, 2016 at the John Sprunt Hill House in Durham.

Most all of the Council’s member garden clubs received award certificates from The Garden Club of North Carolina, Inc. for their financial support of the Tomorrow’s Legacy program. The program disburses a $50 contribution among the Daniel Boone Native Gardens in Boone, NC, the Elizabethan Garden in Manteo, NC, and the Martha Frank Fragrance Garden at the Governor Morehead School for the Blind in Raleigh.

Special recognition awards were given to a number of Council members by President Trish Stewart. Some awards were special mentions of invaluable service given to Stewart. Retiring Council Treasurer Jennifer Corser was given a Life Membership to The Garden Club of North Carolina, Inc. for her seven years of treasury service and other committee chair responsibilities during that period. She will continue serving as social media and blog editor as a consultant for the Council. Stewart also recapped Durham Council sponsored awards presented at the April 17-19, 2016 GCNC Annual Meeting hosted in Durham. Trish herself was awarded the #200 Blue Ribbon for the 2015-2016 Durham Council Yearbook.

Croasdaile Garden Club member Linda Stewart was recognized as 2015 “triple crown winner” of the Member Award of Honor by The Garden Club of North Carolina, Inc., the Southeast Atlantic Region (SAR) and the National Garden Club. Linda began the Youth Club for Garden Therapy at Durham’s Northern High School 17 years ago and has led its efforts with special needs student ever since.

Also mentioned from the GCNC Annual Meeting was the welcome video taped by NC Governor Pat McCrory praising the work of the state's garden clubs. Daylily Garden Club member and Past Durham Council President Brenda Pollard had secured the video, and it can be viewed with the following link:  https://goo.gl/BbrEtH.

Catering the Council's Annual Meeting vegetarian luncheon was Town & Country Garden Club President Robin Marin and her sister Holly Davis. Board members and committee chairs were each gifted a potted Chlorophytum vittatum (spider plant) by Robin. Attendees of the Annual Meeting were all gifted quilted coasters from avid quilter and Council President Trish Stewart.
Posted by DurhamCouncilGC at 11:23 AM No comments: 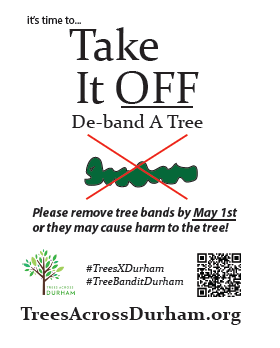 
It's time to take the cankerworm tree bands down!
Please help keep our trees healthy by pitching in and removing bands you see near your home, work or school. Even if you didn't put it up--we encourage you to help take them down!
Posted by DurhamCouncilGC at 7:29 PM No comments: